Joyce and Raymond are pleased to announce the reopening of all classes at the Village Hall Brantingham Nr. Brough as and from Tuesday September 21st.  We look forward to greeting all of our customers and friends, past and present to our Ballroom, Latin-American and Sequence Dance Classes.

We thank you all for your patience and understanding during the past months of the dreadful effects that the pandemic has had on many walks of life.

Please consult all classes or changes that are suitable for you under the Dance Classes tab.

SO FOR HAPPY DANCING
and
SENSIBLE SOCIAL DANCING

WELCOME BACK TO
CALLIS / WAUDBY FOR DANCING

Raymond and Joyce competed during the 1960’s as amateur competitors winning both area and county championships.  They became professional competitors during 1969 and retired from competition during 1972 to concentrate on their dancing school; Callis Waudby for Dancing.  A highlight of their professional competition period was dancing the Tango in the semi-final of the British Professional Championships in Blackpool. 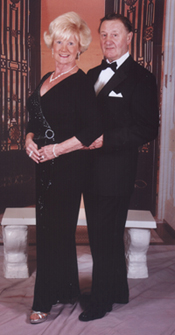 Callis Waudby for Dancing opened during October 1969; qualifying as teachers with the IDTA during 1970.

Raymond and Joyce specialised in teaching adult and children beginners and entering pupils for medal tests.  They went on to hold the biggest medal test in the world for the IDTA at that time, with nearly 700 medal tests entered.

During 1972 Raymond and Joyce began Ladies Disco Rhythmical Fitness classes offering Latin American dance and disco movements coupled with body exercise movements which was successful for many years. During the early to mid 1990’s they introduced American Country Line Dancing into the school; this led to them being contacted by a Professor Purdie Consultant for metabolic bone diseases at the Hull Royal Infirmary.  Professor Purdie had discovered that a small number of his patients had increased their bone density thanks to the Callis Waudby Line Dancing classes.  After time spent with Professor Purdie, Raymond and Joyce choreographed specific line dances and with the support of the local branch of the Osteoporosis Society they commenced line dance classes for people who suffered from osteoporosis which successfully raised many thousands of pounds for the local branch.

Callis Waudby for Dancing continues to teach beginners to dance at the Brantingham Village Hall. Nr. Brough.  Full details of classes offered can be found on the Dance Classes page of this site.